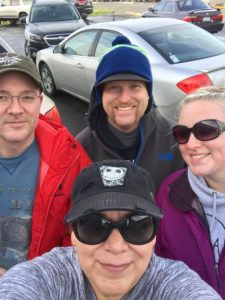 Hearty Volunteers out for the January Cleanup

January 2018 – We are proud and honored to share our selection as Washington Coast Savers’ Group of the Year for 2017 with all the volunteers who clean our coast.The Grassroots Garbage Gang was founded by Shelly Pollock. It’s an informal alliance of locals, tourists, groups, local businesses and government agencies that pull together to clean the beach three times a year, in January, April and July. According to Magen Michaud, CoastSavers Steering Committee member who nominated the group, “There are volunteers, including groups that have adopted sections of the beach, who show up repeatedly to do their part in the organized cleanups. In addition, there are people who take garbage bags every time they go on the beach — the desire for protect our precious beach has been institutionalized!”

eTown is an exciting weekly radio broadcast heard from coast to coast on NPR, public and commercial stations.

One of the show’s most popular segments is the E-Chievement Award. For two decades and counting, listeners from around the country have been submitting names of groups and individuals who are working hard to make a positive difference in their communities and beyond. Out of those community-sponsored submissions come the candidates for the E-Chievement Awards.

The work of the Grassroots Garbage Gang has been recognized three times (!) with an E-Chievement Award for the work we are doing to help keep the nation’s beaches clean! We received an award in 2009, 2010 and 2011. Since the caliber of other nominees is always very high, we are honored to have been chosen.

You can learn more about eTown here: http://www.etown.org/